Written by and from the perspective of Mr. Leonard, the Troop Scoutmaster

Today was the first day of real program.  Merit Badge class began and the scouts became fully engaged in summer camp.  It was a long day that started with a delay at breakfast that caused some concern but we made it through; it appears the early shift did not understand that our breakfast was dependent on them getting done timely.  The Camp Director has been responsive and we are making the best of it.  We did lunch at camp, then went onto open program where most of the continued working on merit badges.  After dinner was an easy night in our campsite where the scouts continued to play some games (while a fire was burning that some enjoyed).  I was (pleasantly) surprised that a lot of our scouts were lined up to take a shower.  Some did personal fitness while other just hung out.  Good start to camp. 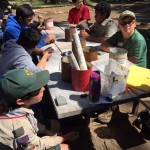 Virtual Meetings
During the COVID-19 pandemic, we are conducting virtual meetings until further notice. See Scouting at Home for more information